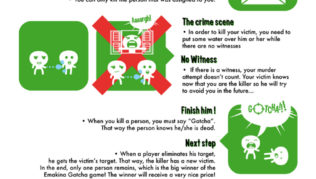 Watch your backs if you are working at Emakina’s Brussels headquarters!

Who will be the last survivor in the Wild West (or rather south east…) of Brussels? We’ll know in a few months because a GOTCHA murder game will be launched next week among Emakina’s Brussels-based employees. From next week on, everybody is a potential killer!  So be vigilant… What’s the game all about? Well, it’s […]